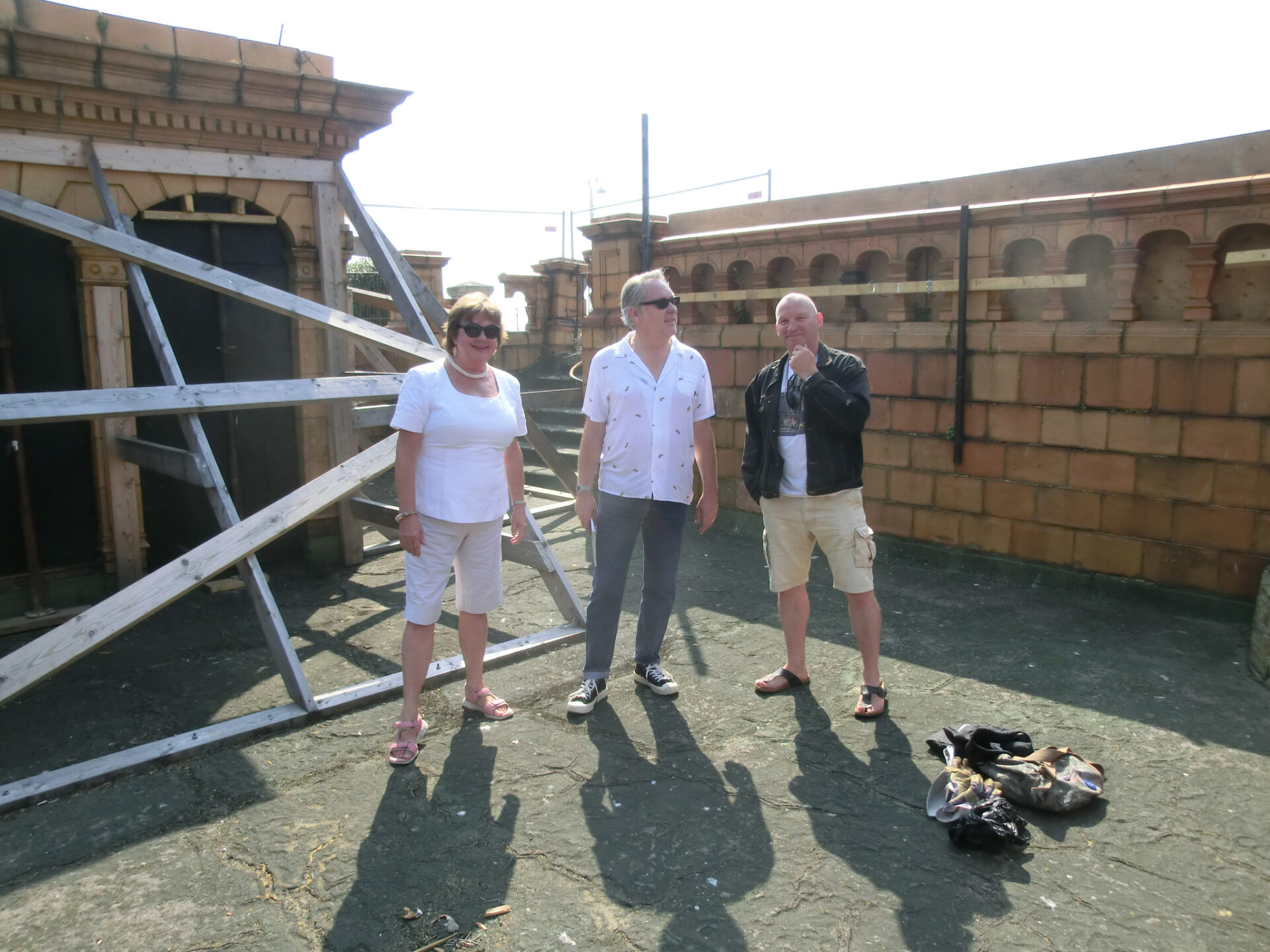 1. How long have you lived in Folkestone and why are you so passionate about the town?

I first moved to Folkestone in 1991 when my husband was working on the Channel Tunnel. We bought an apartment along the Leas facing the Channel and France and just loved the “vibe” of the town, although back then it was looking a bit unloved and uncared for. Then about three years later we moved to Asia, where we remained until our return in 2013. The positive change to the town since we were away was astonishing.

2. How did Leas Pavilion first come to your attention?

My husband and I used to go to the Leas Club on wet Sunday afternoons, usually with friends and visitors when it was impossible to take long seafront walks. Although it was a bit rundown, the magnificent architecture of the building was still there to be seen. The art deco stained glass windows stick in my mind as just one of the many beautiful features.

3. Why is the pavilion such an important part of the town?

The pavilion is important to the town because it is a constant reminder of what Folkestone was like back at the time of its creation in 1902. Folkestone was a highly desirable seaside town frequented by the then Prince of Wales, later to become King Edward VII.

It was a magnet to wealthy Londoners who wished to be in the same place, and to stay in beautiful Victorian buildings such as the Grand and the Metropole. It was an experience to then walk along the Leas and take in tea and the ladies’ orchestra at the Leas Pavilion. Its history is fascinating, right up until its eventual closure in 2010.

4. You are Chair of the Friends of the Leas Pavilion. Why was this group created and what has it being doing to try and save the building?

The group was created in 2015 by a local historian named Nicholas Reed. I attended a public meeting where he suggested forming a “Friends” group to save the building, which had by that time been falling into disrepair, and I willingly joined the committee.

Some months later when Nicholas stood down due to work commitments, I became Chairman. It had been purchased in 2008 by Churchgate Ltd, who had submitted (and had approved) plans to create 58 flats around and above the listed building, and turn the Pavilion into a gym.

However, we suspected that what they really wanted was to get rid of the building so we started to put pressure on Churchgate, and on the District Council (who after all have a duty of care to listed buildings). We felt that keeping a high public profile was important, and a deterrent to any “accidents” occurring. We therefore enlisted (mainly with the help of my Vice Chair, Ben Shockley, himself an actor) some celebrity support, some of whom agreed to be filmed talking about the building.

Firstly Vic Reeves, who lives locally and knows the building well, then Griff Rhys Jones (President of the Victorian Society), Sir Ian McKellen and many, many others. This certainly meant that we were able to get the attention of both of the local press, ITV Meridian news and BBC South-East.

We also did a crowdfunding exercise back in 2016 to raise funds to commission a feasibility report as to the costs of restoration and possible uses with Purcell Architects in Canterbury. We realised our financial goal in seven days, which was a very powerful message as to how popular this building is!

5. Was the grant of planning by Folkestone & Hythe Council for the restoration of the existing building and construction of 91 new apartments a major step forward in securing the future of the pavilion?

Absolutely yes. Another developer had looked at possible purchase and had engaged with us, but they were unable to make the figures add up and stepped away. To our minds, when Gustavia suggested this solution – restoring the pavilion to create a grand entrance to 91 new apartments – we were at first a little taken aback. It was not something we had previously considered, but after due consideration we felt that it was the only way that the pavilion could be restored and properly looked after for perpetuity and also allow community use. We therefore showed our support at each stage of the planning process.

6. Developer Gustavia has acquired the property and work has started on the restoration of the pavilion before a nine-storey apartment building is created on top of it. How have you worked with Gustavia to ensure the integrity of the pavilion?

Gustavia and Hollaway Studio have engaged with us constantly since the design plans were being drawn up, and we have given our suggestions also. Our main concern was about the community use, with concerns that the residents could eventually disallow this. Gustavia has been keen to ensure that this cannot happen and to that end, has engaged in a very exciting new scheme (we are one of four pilots in the country) which will ensure a “Protector” scheme is watertight. This was devised by a former advisor of ours, Jess Steele, together with a colleague of hers, Bob Thust, who were passionate to ensure that what happened to Hastings Pavilion could never happen again.

7. The restored pavilion will be offered for community use for up to 100 days per year. What activities could take place in the space?

We are hoping that public performances such as recitals, music and dance, possibly comedy nights, will be permitted, as well as some day events – yoga, art classes and other events as suggested by the local population.

8. How excited are you to see work finally start on the restoration of the pavilion?

Beyond excited – as are all members of the committee. Gustavia have shown immense patience and fortitude in getting to this stage, and we thank them for this.

For more information on the Leas Pavilion restoration, visit: www.leas-pavilion.co.uk

For media enquiries please contact David Ing at Fabrick on:

The Leas Pavilion lounge, restored to its 1902 former glory, is a rare example of a Grade II listed purpose-built Edwardian tea room.

With its ornately moulded ceilings, elegant galleries, the grand imperial staircase and a sprung dance floor it has been the favourite local venue for culture, art and leisure for over 100 years.

By combining traditional English heritage with modern architecture from Hollaway Studios, we are able to offer a highly desirable prime seaside location with stunning ocean vistas, grounded in the deep roots of the area’s local history.

All this with high-speed access to central London and an entry point to the channel tunnel just a stone’s throw away; the whole of Europe is at your doorstep. 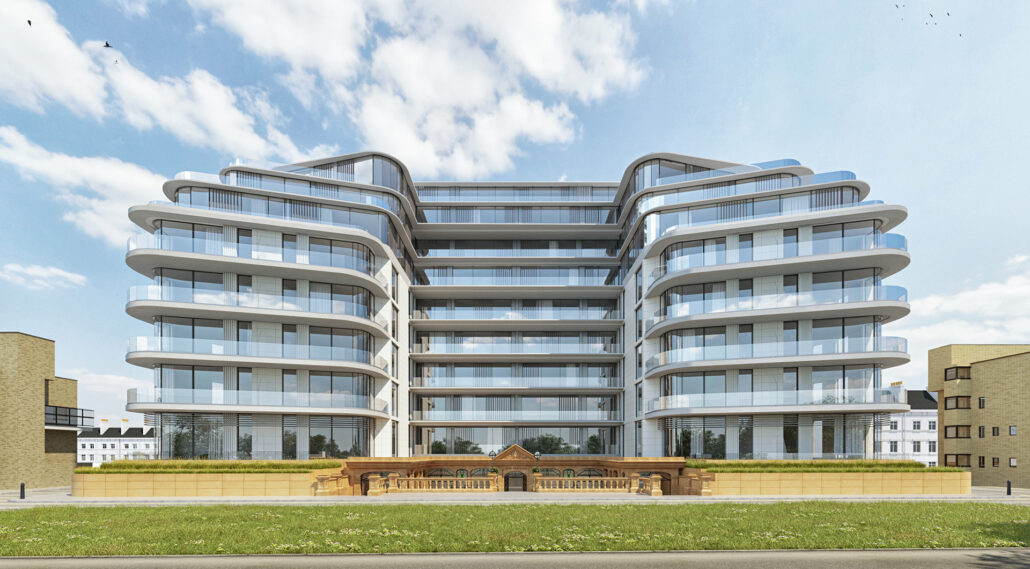 All information in this website is for illustrative purposes only, not to scale. The pictures are approximate only. Whilst every attempt has been made to ensure the accuracy no responsibility is taken for any error, omission or misstatement.

By clicking "Accept Settings" you agree to store cookies on your device to improve website navigation, analyze website usage and to help us with our marketing projects. By clicking on "Settings" you can manage your preferences.

By clicking "Enable all" you agree to store cookies on your device to improve website navigation, analyze website usage and to help us with our marketing projects.

These cookies are necessary otherwise the website will not work. These cookies cannot be disabled but we will inform you of this. In most cases, these cookies are only used in response to an action by you that essentially requests a service, for example, registering your privacy settings, logging into the website or filling out a form.

These cookies allow us to count visitors and their origins so we can analyze and improve the performance of our website. They help us understand which pages are most and least popular and how visitors move throughout the site. All information collected by these cookies is aggregated and therefore anonymous. If you do not allow these cookies, we will not know when you visited our site.

Please enable Strictly Necessary Cookies first so that we can save your preferences!

These cookies may be set by our advertisers on our website. They may be used by those companies to build a profile of your interests and show you relevant ads on other websites. They do not store any direct personal information, but they are based on unique identifiers from your browser and internet device. If you do not allow these cookies, you will see fewer ads targeted to you.

Please enable Strictly Necessary Cookies first so that we can save your preferences!